Q: Who’s involved in the negotiations?

Thirteen rail unions covering 115,000 freight rail workers across the country are collectively negotiating with seven “Class I” freight railroads and their subsidiaries. All rail unions are now bargaining as a single “United Rail Unions coalition. Six of the Class I railroads are represented by the National Carriers’ Conference Committee (NCCC), which is the bargaining arm of the National Railway Labor Conference (NRLC).

Q: Which unions are involved?

The thirteen involved rail unions are:

Click here to learn more about the thirteen involved unions.

Q: What companies are involved?

The seven involved Class I railroads are:

Q: What Process Governs These Negotiations?

Q: What are the biggest issues for the freight rail industry?

The freight railroads are making more profits than they’ve ever made in the history of railroading – more money than the Gilded Era robber barons – while their workforce is at its lowest number in decades. In fact, the seven Class I railroads have collectively made more than $146 billion profits while cutting 45,000 jobs, or 29% of their workforce, since 2015.

At the same time, the companies have implemented harsher workplace attendance policies that penalize workers for taking time off, even for things like COVID or caring for a sick family member, because they don’t have enough workers.

Workers haven’t received a pay raise in three years, are exhausted from working around the clock, and have virtually no time off to rest or see their families. The burnout is causing even more workers to leave the industry in search of better jobs that give them dignity and a life.

Railroads have laid off and mistreated workers, scrapped key equipment like locomotives, and decreased capital investments all to try and make more money.

Why? Since 2015, freight railroads have implemented an operating model known as “precision-scheduled railroading” or PSR. The mantra of PSR is “do more with less.” It’s a Wall Street approach to operating a business, which means decreasing operating costs to increase profits and stock prices. No matter the cost to the workers who are responsible for creating those profits, the rail customers who need reliable rail service, or communities that suffer from things like longer trains.

Q: How long have the negotiations been going on?

The negotiations have been ongoing since November 2019, so almost three years now.

Q: What are the workers fighting for in the contract?

Rail workers want a contract that provides: 1) the pay raise that they have earned; 2) good benefits, including healthcare; and 3) safe working conditions, including guaranteed paid sick leave and attendance policies that allow workers to see their families.

Q: Why have negotiations been going on for years?

The Class I rail carriers have not been negotiating in good faith with the unions. They are offering a net pay cut to the workers and have demanded major concessions on health care.

The railroads’ offer is an insult to these frontline heroes, who worked through the COVID-19 pandemic and put their health and well-being at risk so that essential cargo like medicine and food could continue to move across the country.

During the three years that these negotiations have taken place, the railroads have not improved their initial inadequate offer while the rail unions have attempted to compromise.

Q: What are the next steps in the negotiating process?

The PEB is composed of three neutral arbitrators with experience in rail negotiations and previous PEB’s. The PEB will investigate and make recommendations that may end the dispute. The PEB recommendations are voluntary but oftentimes the PEB’ recommendations lay the groundwork for a negotiated deal. Rail workers will still have an opportunity for negotiation and ratification of their contract.

The PEB went into effect at 12:01 am ET on July 18th. The creation of the PEB forestalls a rail lockout or stoppage for 30 days as the PEB investigates and develops its recommendations. The report was issued on August 16th.

Q: Since the President is involved, does Congress have a potential role in this dispute?

In rare instances when the parties have not reached an agreement before exhaustion of the RLA negotiation process, Congress has stepped in to prevent or terminate service disruptions. Past congressional measures have sometimes included implementation of PEB recommendations, additional cooling-off periods to continue negotiations, and compulsory arbitration.

Following the expiration of the 30-day cooling off period on or about September 18th, Congress may want to intervene. The last time Congress imposed a freight rail industry labor contract was in 1992 after the Class I railroads locked out all the freight workers and shut down the entire country’s rail service in response to a dispute between CSX and an individual rail union. 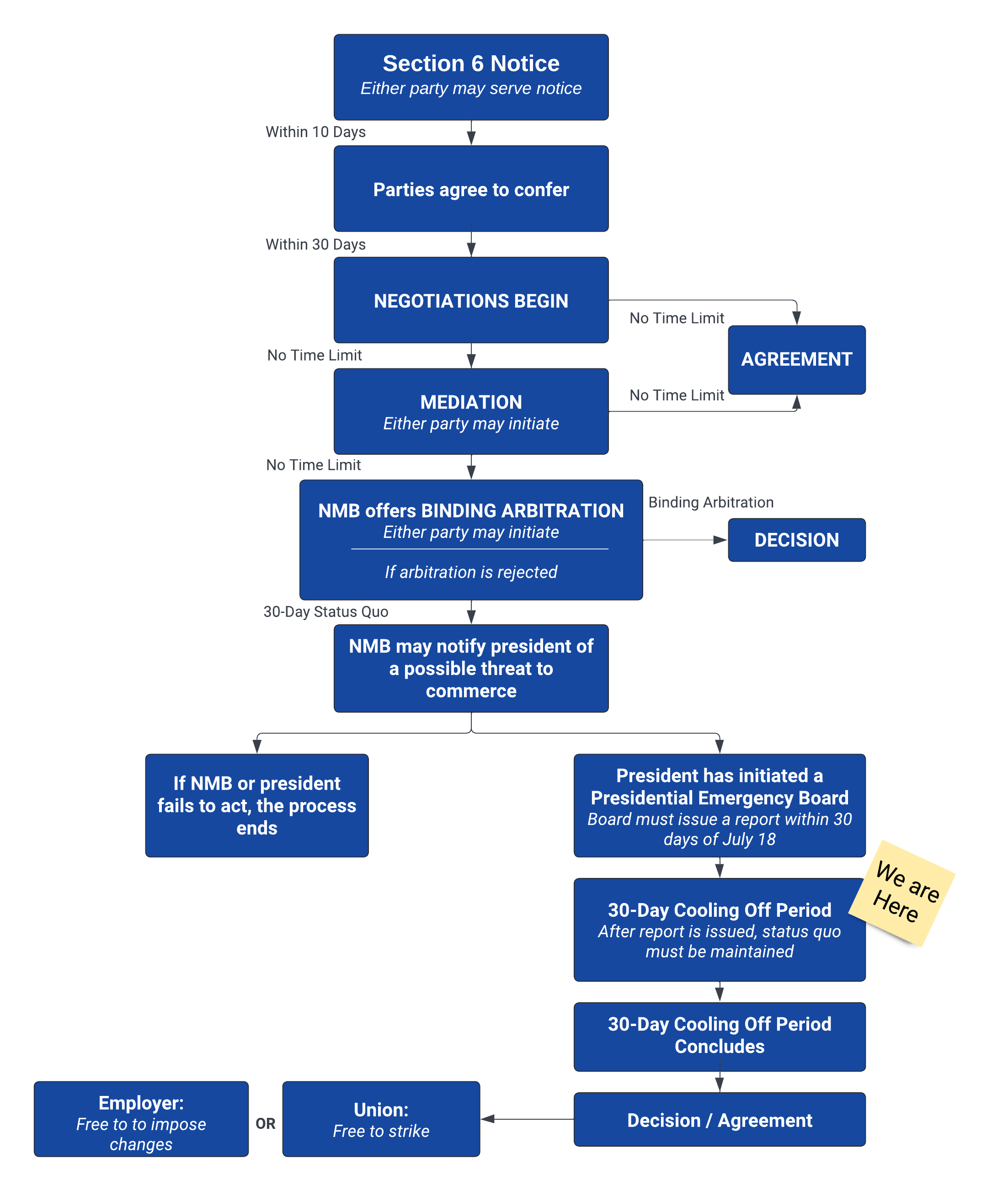