Mar 9, 2022 Letters to the Administration 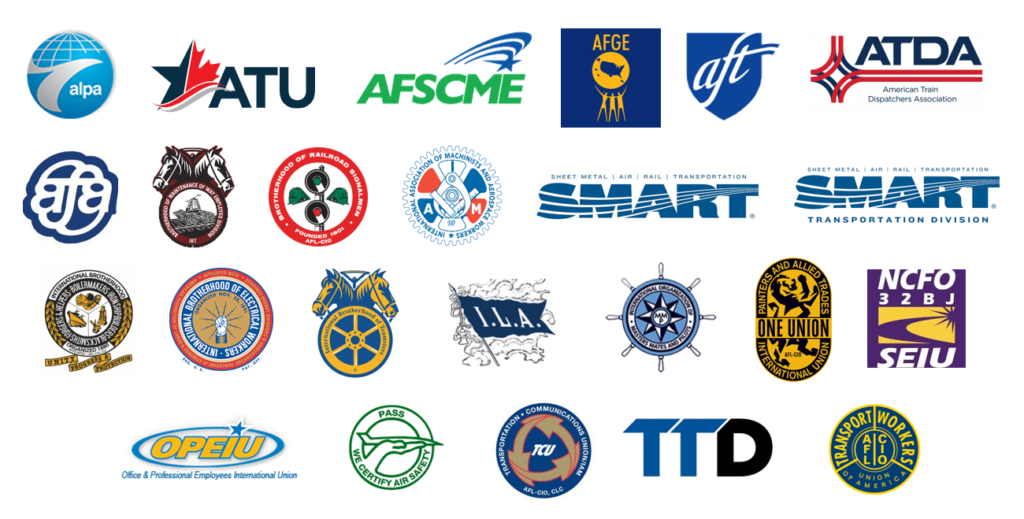 On behalf of U.S. transportation workers — including the vast majority of public transportation employees — who are collectively represented by the undersigned unions, we are writing to ensure you are aware of the increasingly dangerous atmosphere in our public transportation systems and to urge you to protect workers and riders by immediately implementing the safety provisions of the Bipartisan Infrastructure Law (BIL). Our members include bus and rail transit operators, station agents, car cleaners, mechanics, and other frontline workers, all of whom are at risk of assault and worse each day they arrive at work. President Biden committed to protecting these workers and that promise was enshrined into law as part of the BIL. Before, and particularly during the COVID-19 pandemic, these workers have laid their lives on the line every day to ensure Americans have access to safe, reliable transportation, and we must not turn our backs on them another day.

In 2015, transportation labor unions successfully fought for the inclusion of assault prevention language in the Fixing America’s Surface Transportation (FAST) Act. This language required the Federal Transit Administration (FTA) to publish a Notice of Proposed Rulemaking (NPRM) that established safety standards, practices, or protocols for protecting transit operators from the risk of assault. Under President Donald Trump’s leadership in 2019, more than four years after the passage of the law, the FTA issued a toothless suggestion that transit agencies merely examine the problem if they felt so inclined. Specifically, the notice required local transit agencies to study the problem, but stopped short of requiring any meaningful action. Our unions condemned this failure of leadership at the time and Congress joined us in calling out the FTA for ignoring its obligations to the transit workforce.

In the absence of clear federal leadership under the watch of President Trump, transportation labor once again fought for a legislative remedy that would put a stop to worker assaults and secured specific worker safety requirements in the recently-passed BIL. The safety requirements passed in that law were based on the Transit Worker and Pedestrian Protection Act, which was endorsed by President-elect Biden and enjoyed strong bipartisan support in Congress, with more than 200 Democratic and Republican cosponsors in the House.

The FTA is now statutorily required to collect accurate data on transit workforce assaults, to reform its Public Transportation Agency Safety Plan (PTASP) process to include worker voices and incorporate measures to reduce the risk of assault in every transit system, and to update its national safety plan to address the risk of assault and public health concerns.

It has now been almost four months since the passage of the BIL and transit workers — who, like any of us, simply want to go to work each day and not worry about whether they may be attacked or killed on the job — have continued to face the threat of violence in the workplace. Consider some of the following examples:

Incidents like these are driving workers away from public transit. Our unions are seeing historic levels of attrition as bus and subway operators, station agents, car cleaners, and others protect themselves in the only way available to them: leaving public transportation.

Our members should not be asked to wait another day to feel safe on the job. This is a position strongly supported by President Biden who, speaking to members of the Amalgamated Transit Union as a presidential candidate, stated clearly: “I remember about two years ago I was working with you guys making sure you were protected from violence on your buses. Just someone getting on the bus and going after you… we need much more support for transit workers because you are the reason why things continue to function. Period. I promise you I’m going to keep banging away at this… and if I’m President, I guarantee you that will be available. We shouldn’t have to wait that long though. It should be tomorrow.”

Consistent with the President’s policy and the changes to law that he fought to include in the BIL, we are calling on the FTA to take the following steps immediately:

Every day that the FTA doesn’t take action puts more transit workers at risk. We look forward to working with you to ensure safety for workers in this industry that is so critical to the safe, affordable, and reliable movement of Americans in communities of all sizes.

Brotherhood of Maintenance of Way Employes–IBT