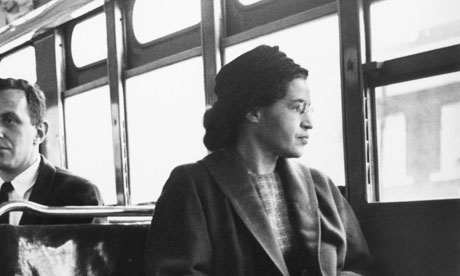 In 1955, the city bus became a symbol of segregation and defiance when civil rights activist Rosa Parks refused to give up her seat in the “colored” section of a Montgomery, Alabama bus to a white passenger.  We know the story well: She was arrested, her actions led to what is historically regarded as the earliest mass protest in support of civil rights in our country, and a young, charismatic preacher named Martin Luther King, Jr. was thrust into the national spotlight.

Today would have been Parks’ 108th birthday. Also known as Transit Equity Day, today is also a firm reminder that the ability to travel freely and affordably, without harassment or hindrance, is a key component of freedom.

While Parks’ actions sparked a movement that took many forms, from iconic marches across bridges to lunch counter sit-ins, the fact that a city bus played a central role in the beginning of the Civil Rights Movement as we know it today cannot be overlooked or underestimated. As Parks said on that fateful day, “My only concern was to get home after a hard day of work.” The way Parks’ message resonated with the public gave her words and actions power.

The simple truth is, the link between mobility and equality remains strong. It always will. Parks, and later the Freedom Riders, used the ability to travel freely as a platform to fight for dignity and respect because transportation is a crucial component in the fight for social and economic justice. In fact, access to safe and reliable commutes has become a critical lifeline in escaping poverty. Too many Americans are denied access to good jobs and the educational opportunities they need simply because they lack reliable, affordable transportation options. And now, with the emergence of the exploitative on-demand economy, too many transportation workers themselves are denied access to fair wages and healthcare at the hands of corporations like Uber and Lyft.

Today’s celebration of Rosa Parks and her legacy isn’t simply an anniversary. It is a reminder that her struggles can never be forgotten. As Parks so gracefully and bravely taught us, social, racial, and economic justice run in tandem, and for many, transportation can serve as a link that connects all three.