Joe Biden and Kamala Harris Will Deliver for Transportation Workers 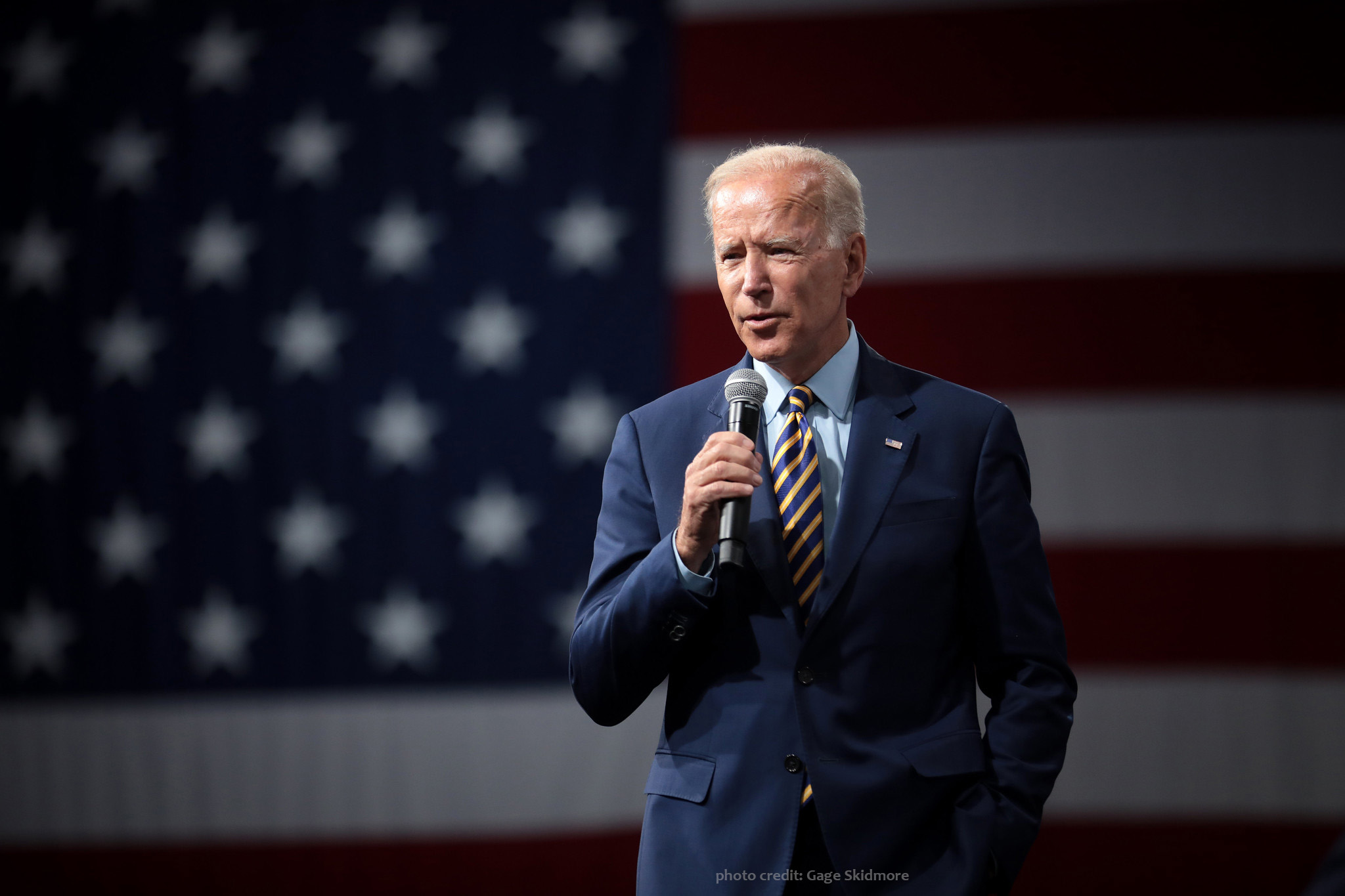 Joe Biden’s 36-year career in public service to our nation has made one thing perfectly clear: he will fight for us. Not just for his friends and donors, not just for the wealthy, and not just for his base. We know Joe Biden, and we know that quality about him is exactly what working people are looking for and expect from our next president.

Few periods in American history have demanded leadership from our elected officials like the one we face today. A global health and economic crisis, constant attacks on the rights of workers, staggering racial and gender inequality, and an economy that overwhelmingly favors the rich leave us at a true tipping point.

Joe Biden and Kamala Harris are the only team that will deliver for working people. They have put forward a clear plan to rebuild our infrastructure, they understand the role that unions play in creating good jobs across our entire economy, and they have taken policy positions that will improve the safety and efficiency of our transportation system. They have the experience, the track record, and the demonstrated leadership to make their plan a reality for working people.

The Build Back Better Plan is Joe Biden and Kamala Harris’s bold vision for using massive investments in our transportation infrastructure to transform our communities and put Americans back to work. Their proposal calls for a total investment of $2 trillion over four years and the creation of millions of jobs by building and upgrading a cleaner, safer, stronger infrastructure — including roads, water systems, municipal transit networks, airports, rail, ferries, and ports.

Most importantly, they know that rebuilding our middle class can only be done if American workers build our infrastructure and manufacture all the materials that go into it. Unlike President Trump, they also understand at their core the absolutely essential role that unions play in creating good jobs in infrastructure. That is why their plan ensures that every dollar that goes into these projects comes with a guarantee that workers have the right to join a union and collectively bargain, and that materials will be sourced in the U.S.

Key details from the plan include:

Joe Biden Supports Positions that Will Improve our Transportation System

COVID-19: Thousands of transportation workers have fallen victim to the novel coronavirus, and thousands more remain at risk while the current administration sits on the sidelines. Unlike President Trump, who has refused even the most basic protections for frontline workers, Joe Biden has a four-point plan to protect our essential frontline workers on day one. His plan includes:

Protecting Public Transportation Workers: Joe Biden stood up for America’s 400,000 frontline transit workers by endorsing H.R.1139, the Transit Worker and Pedestrian Protection Act. This legislation would put a stop, once and for all, to the violent assaults made against public transportation employees every single day [Twitter, 01/2020]. The Trump administration has shown no interest in protecting the lives of transit workers, and previously sidestepped their responsibility to implement safety measures mandated by Congress [TTD Press Release, 05/2019].

Promoting Rail Safety: While President Trump has rolled back safety requirements that require a minimum two-person crew on freight rail lines, Joe Biden has shown clear support for protecting the safety of our rail workers and the communities they travel through by pledging his support for a two-person crew mandate on freight rail lines [AP News,  05/2019; SMART-TD Endorsement, 07/2020].

Growing Passenger Rail: Joe Biden is a lifelong advocate for America’s passenger rail network. As Vice President, he fought for major investments in the Amtrak National Network — a priority he carried through in his Build Back Better Plan. And as a Senator, he knew first-hand the value passenger rail brings to our nation, commuting daily from his home in Delaware to Washington, D.C. over the course of his career [DNC features Joe Biden and Amtrak workers, 08/2020]. President Trump, on the other hand, has repeatedly proposed massive cuts to the Amtrak long distance program, the Northeast corridor, and to all discretionary rail safety programs established in the FAST Act [Washington Post, 02/2020]

Protecting Aircraft Cabin Air Quality: Joe Biden has strongly endorsed the Cabin Air Safety Act (H.R. 2208/S. 1112), which would improve air quality on board passenger aircraft, requiring the FAA to develop training requirements for pilots, flight attendants, first responders and aircraft maintenance technicians on how to respond to incidents involving smoke or fumes on board aircraft. It would also provide further research on methods for combating hazardous fumes during flight. This would build on the Obama-Biden legacy of giving OSHA the ability to regulate workplace safety in aircraft cabins.

Fighting Back Against Worker Misclassification: Joe Biden and Kamala Harris have both endorsed the PRO Act and California’s AB 5, which establish strict tests to prevent the misclassification of workers as independent contractors. If passed, the PRO Act would ensure workers, including those in the emerging gig economy like Uber and Lyft drivers, are no longer taken advantage of by a handful of rich tech industry investors. [Joe Biden Twitter, 05/2020; Kamala Harris Twitter, 07/2020]

Committing to the FAA and Modern Aviation: Vice President Biden is committed to fully funding the FAA and to fully implementing the NextGen technology modernization. This will help ensure that the U.S. airspace remains the safest in the world, and that U.S. air travel becomes more efficient and reliable. (Joe Biden Infrastructure Plan)

Holding Foreign Repair Stations Accountable: An increasing amount of aviation maintenance and repair work has been sent overseas, where repair stations are subject to a separate and unequal regulatory framework. Vice President Biden has committed to ensuring that foreign repair stations that work on U.S. aircraft are subject to the same rigorous standards that we expect here at home. This starts with enacting a drug and alcohol testing rule and stricter security standards at U.S.-licensed foreign repair stations.  (Joe Biden Infrastructure Plan)

Protecting Federal Employee Rights: On day one of his administration, Vice President Biden will rescind the Trump executive orders that gutted the ability of federal unions to fairly represent their members. This is just the first step in the Biden plan to give public sector workers the rights, support, and respect that they deserve. He has also committed to collaborating with federal employee unions to repair the damage wrought by the Trump administration on workplace conditions and employee morale.  (Washington Post, August 26, 2020)

Fighting to Protect Truck Drivers: Kamala Harris opposed any efforts to preempt state safety laws ensuring meal and rest breaks for truck drivers in two letters to Mitch McConnell that she led along with her Senate colleagues [Kamala Harris Press Release, 12/2017; Kamala Harris Press Release, 06/2018].  When California took commendable steps to ensure that drivers were given meal and rest breaks to promote their health and safety, along with the safety of everyone they share the road with, the Trump administration abused its federal authority to preempt these requirements and deny workers even the most basic dignities at work [TTD Federal Comments, 06/2019]

Joe Biden has a track record of delivering on his promises for the American people. Through his successful, transparent, and accountable administration of the American Recovery and Reinvestment Act (ARRA), Joe Biden proved to the American people that we can count on him. Just one year after its passage, Joe Biden announced that 10,000 transportation projects were under way in all 50 states and the District of Columbia because of the ARRA. Among those projects were the improvement of more than 33,000 miles of pavement; aiding in the purchase of about 12,000 buses, vans and rail vehicles; helping to construct or renovate more than 850 transit facilities; and providing more than $620 million in preventive maintenance [CCJ Digital, 03/2010].

Beyond championing those critical investments, Biden is widely credited with getting federal funds out the door quickly, and with the highest degrees of accountability to ensure that they supported struggling Americans and were not subject to the waste, fraud, abuse, inefficiency, and ineffectiveness that they may have fallen victim to otherwise [Brookings, 04/2020]. It is a credit to Biden’s experience in government, but it is also a credit to his core belief in serving the American public and doing it with the integrity we expect of our leaders.

Video: Joe Biden will stand up for working people